"Will earns the respect of his new colleagues. A Resistance attack comes to the home front and brings the Bowman family together. Maddie finds a new job that makes the most of her talents."
-Official Synopsis

The episode opens with helmet cam footage, from a Redhats changing room and then on the way to a door knocking mission at a high school. We hear the wearer of our helmet cam being called "Deke". The platoon of Redhats detain a teacher whose crime seems to be that she's used a Ray Bradbury novel in class. (Fahrenheit 451)

One member of the platoon hits a male student in the face with the butt of his rifle while another member slams the teacher's head into her desk, throws her to the floor and then points a weapon at the students. They take the teacher out to waiting APC as she begs them not to.

Back at the changing room "Deke" puts his helmet on the shelf in his locker; we see that "Deke" is Broussard as he takes off his ski mask.

Madeline Kenner is getting dressed for the day, taking great care with which dress she chooses and with her make-up. We can see her son, Hudson Kenner still asleep on the sofa behind her.

She gives Hudson breakfast and an insulin shot and then takes him through to the main house for his lessons with Gracie Bowman.

Her sister, Katie Bowman asks if she's got anything special today - because she looks nice - and Maddie answers "we'll see"

At Homeland Security HQ, Will knocks on Phyllis' door. She calls him in and shows him an organisation chart of "The Insurgency", it shows Geronimo in the centre and many cells operating independently. She tells him that most in the Transitional Authority (the TA) believe that there's a single controlling figure. She doesn't believe there is but sees a great risk to the TA if they were to unify. She doesn't think there would be a risk to "The Visitors", just to the TA. She does see a great risk to the people in the LA Bloc if The Hosts were to retaliate.

On the chart we can see a few things

Katie see the two children and Lindsey off to the park, saying that she has work to do and can't go.

Katie walks around the house, collecting a doll and a valued picture. She checks through the window then turns on the outside light above the front door. She immediately goes through to the kitchen where she sees a person in black run past the kitchen window. She waits - then hears glass smashing in the other part of the house, and hears the sound of a fire starting. She counts to five and then takes the fire extinguisher from under the sink (right by where she was standing), walks through to the dining room - where a small fire has already seen off the curtain and is fast becoming a bigger fire. She finishes counting to ten and then, quite calmly, puts the fire out and calls her husband.

When Will gets home the fire crew's EMTs are looking after Katie and RedHats are searching the house. Will's objections to the search don't get him far and Katie has to go to Homeland Security HQ to answer some questions.

She's treated as a guest when she gets there though, with Phyllis herself asking the questions. Phyllis also lets her know that Katie's neighbours are being intimidated into protecting the Bowman family and will be held responsible if any harm comes to them. "Patrick and Joanna Hart" from two doors down are made responsible for organizing patrols. A couple of times during the interview Phyllis seems to be about to give Katie a hard time over inconsistencies in her story but she backs down each time she makes Katie uncomfortable. Phyllis knows Katie and Will's backgrounds very well and lets her know that. Will organizes her ride home after the interview.

While this is happening Maddie is going through the security checks needed to enter the Green Zone. She gets assigned to a woman, Charlotte Burgess, who is responsible for distributing artwork. Initially Burgess is unimpressed with Maddie and gives her some filing to do.

Will goes into Phyllis' office and wants to know what has happened. After talking about the lies they're forced to tell about how great The Hosts are. Phyllis puts him at his ease and then tells him that they found tapes of Geronimo's broadcasts in Bram's room. She makes it plain that she won't release those tapes into evidence as long as Will does as he's told.

The whole neighbourhood sees Katie arrive home in a Homeland Security SUV, the door opened for her by a very respectful Redhat.

Inside, Lindsey is looking after the the children, Gracie runs and hugs her. Lindsay's only comment is to say that "It's lucky you asked me to take the kids to the park." Katie just thanks her and lets her go for the day. When Will gets home he tells Bram off, and makes Bram tell him how he knows when to tape the broadcasts.

That evening, Katie goes to see Quayle, he asks her to identify Will's boss. Katie does this after getting the same promise from Quayle that she already had from Broussard, that Will won't be touched.

During a Geronimo broadcast the next day Will manages to arrest Geronimo at a Library. He takes him, hooded, back to Homeland Security HQ. Will doesn't believe that the man he's arrested is the leader of The Resistance, he and Beau hand him over to the people who will interrogate him; they look more like medics than a police interrogation team.

Upstairs Alan Snyder is bragging to Phyllis about how he's told The Hosts that Geronimo has been captured. Phyllis cuts him down to size by making him admit that he didn't talk to them directly but through someone called Helena. When Will tells them he doubts that the man they've arrested in the mastermind of The Insurgency Snyder is visibly worried.

Maddie has finished her filing and is listening to a conversation between Charlotte Burgess and a male assistant. They're concerned that they don't have an important enough piece to give to someone called Georgina Hamilton; Maddie butts into the conversation and lets them know she's aware of where a lot of important artwork is held, because of her work in the gallery before The Arrival. Burgess is suddenly very interested in Maddie.

Will is searching an of scrub-land with Jennifer McMahon, Beau and some Redhats. They're there because a "detainee" has told them that this is where he got the scripts to broadcast. Will is doubtful. Beau finds a small tunnel with a trolley arrangement that could be used to deliver or collect small items, like a script for broadcast perhaps. Will looks at the area the tunnel goes in and realizes that its other end must be in the Green Zone.

Charlotte Burgess and Maddie are sitting a drinking wine when the artwork arrives back from where Maddie said it would be. Burgess is impressed and wants to know where other artwork is being held. Maddie's willing to tell in return for a job and a guaranteed insulin supply for her son. Burgess agrees immediately. After Charlotte Burgess has left the room Nolan Burgess arrives and is obviously attracted to her. Maddie is polite, but also appears to bend over facing away from him while picking up her bag, with her back arched and for just a moment longer than necessary.

Back at work, Will is telling Phyllis about the little tunnel they've found. She is pleased and tells him that she's destroyed his son's tapes. Will's not sure he believes her and leaves for the day.

At home he finds Katie cleaning up after the fire and they talk about their days and about their children. He asks about File:The Beach Photo.png, that Katie moved before the room was fire-bombed and she tells him it's safe because she'd broken the glass. Katie leaves for The Yonk and Will, looking concerned searches until he finds the photo.

Katie arrives at The Yonk to open up for the night and finds Phyllis already there, waiting for her at the bar with a drink for them both. Phyllis talks about inconsequential things for a minute, the name of the bar, about a trip she took with her husband at the beginning of their marriage and a very personal detail about when she worked in Ireland. Then she tells her she knows about Katie's involvement with The Resistance and that she, Katie, works for her now. Katie just stares at her.

Phyllis is driven to her home in the Green Zone, past all of the security checks. When she gets home, she tells her driver to pick her up at 8.30 in the morning. As she walks in she takes a call on a satellite phone and we hear her side of the conversation. She talks about Snyder and about Katie. At one point she says "I don't know, their perception of time makes that unpredictable." It's not clear who she's referring to.

From the kitchen she goes to her husband's room. She sits and talks to him, asking about his day, telling him about hers. Ed, her husband, is sitting up in bed not responding to her, he looks as though he's had a serious stroke at some time in the past.

She leaves him for a moment, saying that she'll be right back and that they'll read together.

Phyllis walks into a darkened room and turns on the light. Broussard is there in his Redhat uniform. She sees him stand and calmly asks him to shoot her husband as well. Broussard kills her without a word, then walks into the bedroom where she'd left Ed a moment before; we hear two more shots.

A look through Broussard's helmet cam

Investigative Board illustrating the Organizational Chart of the Insurgents (or Resistance) 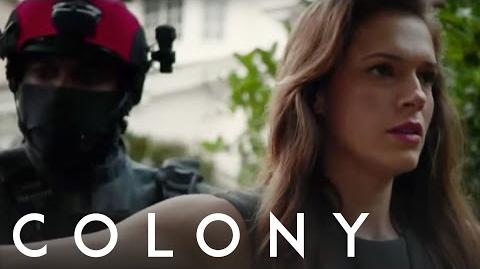 Retrieved from "https://colony.fandom.com/wiki/Blind_Spot?oldid=12417"
Community content is available under CC-BY-SA unless otherwise noted.