A drone shows up, watching Will and Beau work

"Brave New World" is the second episode of Season 1 of Colony.

Carlos and his wife and son are collecting food rations. They go back to the garage and Carlos' RV, she is worried and he reassures her before he goes into work. While he's inside a drone and then Homeland Security turn up, the Red Hats go in, shots are fired and Carlos is arrested. She and her son are still in the RV and hid in a storage compartment under the bed, from there they see Carlos being taken away.

Katie returns home on her bicycle with the dog and sees an official car on their driveway. In the houe Madeline is giving Gracie and Hudson a meal. She asks Katie where she's been for so long, Katie is evasive. She goes upstairs and wakes Will who's sleeping late, she asks what he did on his first day working for Homeland Security and asks about the car.

Later that day Will goes to a meeting with Phyllis, his new boss and his given his ID card by Jennifer McMahon. Phyllis introduces herself but doesn't give her last name. She gives him his first case - to find and detain Andrew Hynes who's wanted for bombing The Gateway - and introduces him to Beau.

Katie goes to The Yonk, her bar that had to close after The Arrival, she starts to clean it up. Broussard visits and tells her that the resistance want to know how close Homeland Security are to catching the cell that bombed the Gateway.

Will and Beau go looking for Andrew Hynes at his girlfriend's apartment. Hynes is scared into running and Will catches him behind the apartment building, they take him in.

Maddie is working as a waitress at a party where she meets someone, George, that she used to know before The Arrival. They leave the party together and go to his house which is in "The Green Zone"

As Will is taking Hynes to detention he sees Carlos in the holding cell and they talk. Will promises to look after Carlos' family and to get Carlos himself out of there. Will goes to Phyllis and tries to get Carlos released as an informant.

Will goes to the garage where blood is being washed off the walls and looks for Carlos' wife and son ion the RV, they aren't there.

Katie and Gracie are playing Drafts at the kitchen table when Carlos' family turn up at the door asking for help. Katie goes to Broussard who refuses to help, saying that the resistance doesn't have the resources to help people.

At George's house Maddie has just got out of the shower and dressed, she goes into the kitchen where George is packing a box of food for her and it becomes obvious that George won't be seeing her again. Maddie is not pleased, but does take the food.

Will arrives home and takes Carlos' family to get new IDs. On the way they are stopped by a security patrol who apologise and let them carry on as soon as they see Will's ID card. Will and Katie take Lucia to get fake IDs at a place where they're obviously known and trusted.

At the Bowman home Bram and Gracie are there, Bram let's Pia, his girlfriend in and sends Gracie up to her room. Pia has a present for Bram, some expensive headphones.

After arranging for new IDs, Will leads Luicia and Mateo down some stairs to what looks likes an underground car park with tents, filled with people. Lucia is very nervous but the leader of the camp tries to reassure her

Katie meets Quayle in a park, He's reading a book while sat at at a table and Katie sits with him, quite openly. Broussard is standing a little way off, watching them. At one point Quayly turns and looks at him, as if asking Broussard's permissin for something, and Broussard nods. Quayle then asks her what she knows about the Gateway bombing investigation and she tells him about Andrew Hines' arrest; Quayle tells her how that bombing really could lead the investigation to them and that they need to know what's going on "to help them hide"; Katie agrees to give them information on the investigation.

It's dark by the time Will gets back to check on Carlos and he discovers that the prisoners in the holding cells, including Carlos, have been sent to The Factory. Will asks Phyllis but gets a "No", he does get to see Carlos on the bus before he gets shipped out. Will tells Carlos his family are safe but Carlos is still bitter and resentful of Will not being able to save him. Will watches the buses leave for The Factory as the curfew siren sounds.

Later still, with Katie in their garden at home Katie reassures him that he's doing the right thing and that it's not his fault he couldn't help Carlos. They're interrupted by a radio call, from Beau. Beau tells him that they've located the bombing suspects and needs Will there. Katie overhears the message and runs to a public phone booth as soon as Will has gone, she calls Broussard and tells him where the suspects are.

Carlos and the other prisoners have arrived - somewhere. They're told to strip and get into what look like showers. Ultra Violet light and chemicals sanitise them and, wearing surgical gowns and masks, they walk out into a brightly lit area.

Will gets to where the operation to catch the bombing suspects is going on. He and Beau search the building and find the suspects. All dead, shot in the head. "Geronimo" is painted on the walls by the bodies.

Will realizes that they have a leak, but he doesn't know it's Katie, in her turn Katie doesn't know she probably got this group killed to stop them leading the authorities to Quayle's group. 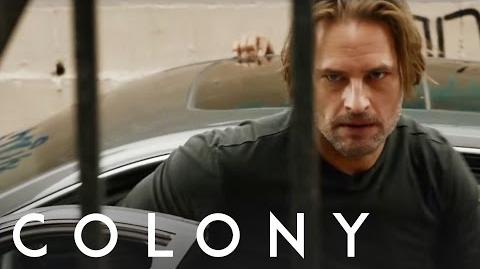 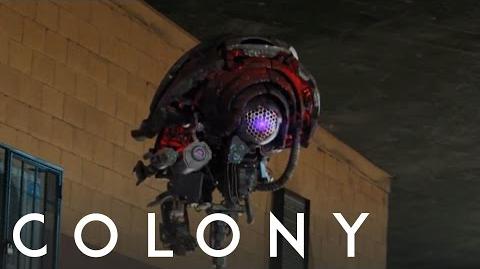 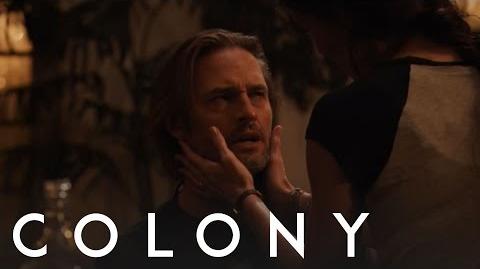 Colony 'What We Have To Do' from Episode 102 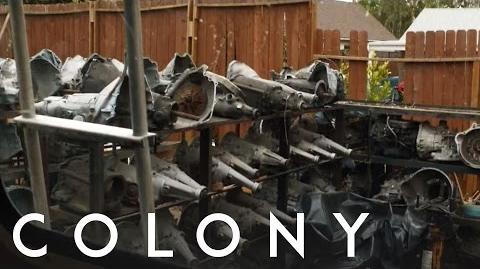 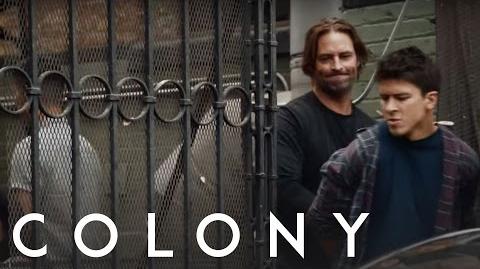 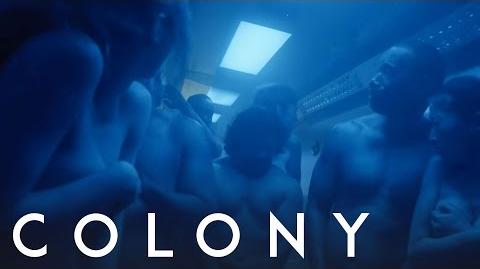 Colony 'Stripped Down' from Episode 102 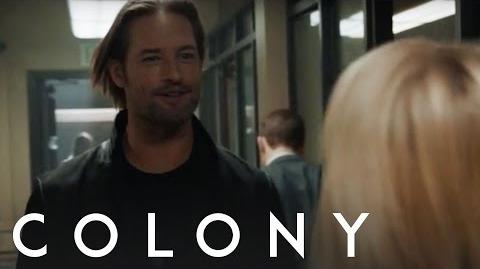 Retrieved from "https://colony.fandom.com/wiki/Brave_New_World?oldid=10819"
Community content is available under CC-BY-SA unless otherwise noted.