"Will’s hunt for the Resistance brings him ever closer to discovering his wife. Katie feels cut off from her family and her cell. Maddie finds herself entangled in Green Zone intrigue."
-Official Synopsis

We see what seems to be a service for a new religion. "Brother" Nolan Burgess is a prominent member, at one point the Minister, Oliver, mentions him, prompting Burgess to stand up and hold his religious book in the air. Lindsey is also in the congregation The symbol of the religion is a stylized drawing of one The Hosts's ships taking off.

Katie arrives home, calling out for "Bram and Gracie", her two children. There's no one home though. Becoming concerned she searches the house, collecting a pistol from her room. While in the hallway upstairs Eric Broussard appears behind her and she kills him - and immediately wakes up from the dream, in bed next to her husband. She gets up, saying it's nothing.

We see Maddie having sex with Nolan Burgess, watched by his wife Charlotte Burgess.

When Maddie is downstairs in the gallery area she sees that a large piece of art is missing. She asks Brett about it but he avoids answering her. Maddie finds the missing piece in another part of the house, covered by a sheet, she sees Charlotte talking to someone, but Charlotte doesn't see her

Lindsey is showing Gracie something when Katie comes in and asks for Bram. They're pretty distracted and she leaves looking troubled. Lindsey starts telling Gracie about her Religion, and the greatest day ever which Gracie's going to be a big part of. She shows the little girl her religious book, telling her that it's secret.

When Katie arrives at The Yonk, there's a Homeland Security team searching the place. Katie cycles past without being seen and goes to Broussard's house. She tries front and back with no luck. She leaves him a voicemail message using a false name.

Broussard's picture is up on the wall at Homeland Security HQ with the name "Dwight Ford". Jennifer McMahon, Will Bowman and Alan Snyder are looking at the picture. Will asks Snyder to give Jennifer access to the Rolodex so that they can track him down. Dwight Ford is Broussard's alias when he's working for Homeland Security and Will organizes a raid on his registered address. When they get there a bomb explodes as they knock in the door, killing four members of the team. Big explosion.

Will and Beau interview Dwight's team mates. The only thing that sounds out of place is a tattoo that Dwight had. From the description Will recognizes the tattoo as one worn by "Marine Force Recon, Spec Ops" personnel.

We see Broussard killing a Red Hat in order to break into a refrigerated truck full of bagged and naked bodies, he opens a bag to reveal the face of an African American man.

The data Jennifer produces doesn't say that Dwight is a military man, so Will tells her to keep looking, based on the picture they have of him rather than the name.

Broussard and Quayle stage Dwight Ford's death, using the body of the African American man that Broussard has borrowed from the truck. The plant a weapon, the same as that used by Homeland Security and burn the body and the vehicle it's in. They talk about Katie, Quayle tells Broussard to kill her.

Will and Beau examine the body and vehicle. Beau thinks it's Dwight and that he's been killed to stop him leading the TA to the cell. Will doesn't believe it though.

At the Burgess home Maddie doesn't see the hostile looks from the maid when Nolan comes in and flirts with her - behaving as if the maid isn't there. Nolan wants sex, Maddie reminds him that Charlotte has to be there, and that it's Charlotte's rule.

She meets Broussard who takes her up to somewhere they can look out at L.A. it's obvious to Katie that he's been told to kill her but he doesn't. He makes allegations and Katie reminds him that Quayle has proved unreliable - that he'd claimed a connection with Geronimo, and that Geronimo turned out to be a Green Zone advertising exec. Katie is badly rattled and walks off. Broussard seems almost as rattled as her, but he lets her walk away.

That evening Broussard goes to a house, he greets a young man and is let in. The house is a makeshift, but clean and well organised field hospital. Broussard is there to talk to Rachel, who's wearing scrubs and looking after someone. He discusses Katie with her, tells Rachel that he doesn't believe Katie is a double agent and asks her what she thinks.

The next day Will goes to the Green Zone and is escorted to Snyder's new house, "Hill Haven, Ingrid Bergman lived here once", to meet him. Will tells Snyder about the various identities they've uncovered for Dwight Ford. Snyder gives Will an envelope, about Charlie. Back at home, Will is still staring at the, unopened, envelope when Katie gets back from work; inside is a recent picture of Charlie.

When Maddie arrives for work the next morning she's told "Please don't touch the art", by Brett. He's been told to tell her that by Charlotte Burgess, who's been told that Maddie is breaking her "three is the magic number" rule by having sex with her husband without her being present (she hasn't). Maddie catches the smug look from the watching maid as Charlotte threatens her but still storms into Nolan's office to threaten him afterwards. Nolan raises the stakes by saying that he's grown tired of Charlotte and that he needs a new partner he can trust, and encourages Maddie to report Charlotte's underhand dealings with pieces of art.

In Will's office, a slightly harried looking Jennifer admits that the databases she use to look after dealt with online dating. They were large though, with 17 million people on them. Beau interrupts them with information that sends Will hurrying home to show Katie a picture of Broussard and to ask her if she remembers him from The Yonk. At first she is uncertain, but Will shows her pictures of the people he knows Broussard's killed - and she does the very thing Quayle thinks she's already done. She tells Will the area where Broussard lives, "at his mother's house in Hancock Park".

Jennifer finds out that Broussard's mother "Harriet", died during The Arrival, and that she had a son in the marines. From that they work out Broussard's address.

Katie has a last minute change of heart after a visit to The Yonk by Rachel; she calls Broussard and warns him that Homeland Security is coming for him. Broussard just manages to escape before they arrive.

At Broussard's house Will sees Quayle in the garden next door, but assumes that Quayle just lives there and only speaks to him briefly. He also finds, but does not yet understand, a copy of the same paperback book that was in Katie's hidey hole at The Yonk. 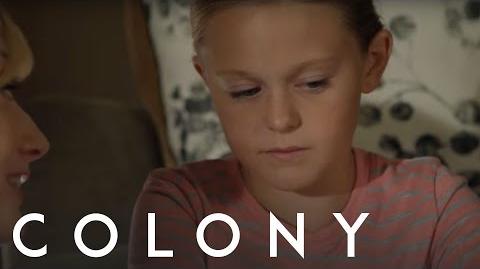 Colony 'Man Really Is' from Episode 107 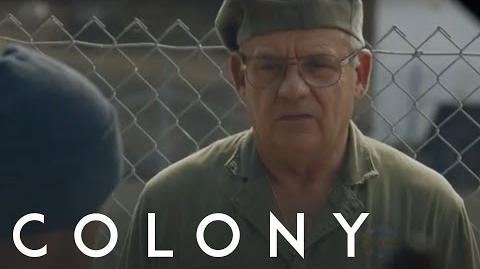 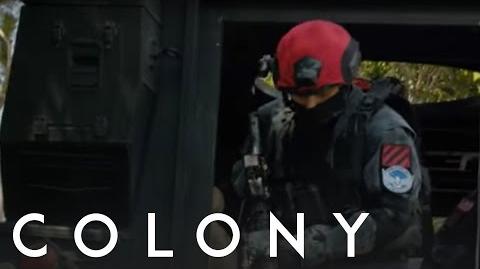 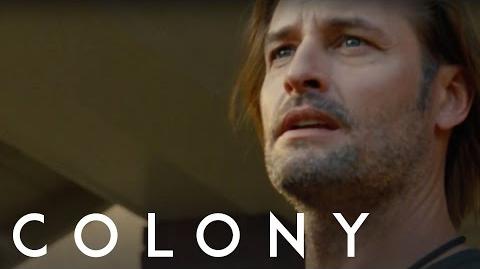 Colony 'Will Entering Room' from Episode 107 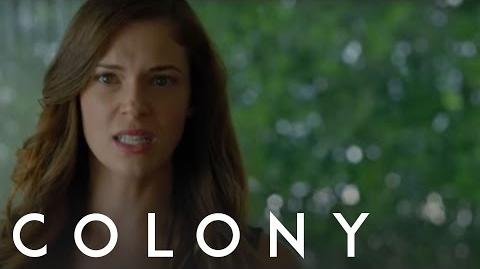 Colony 'I Said Nothing' from Episode 107 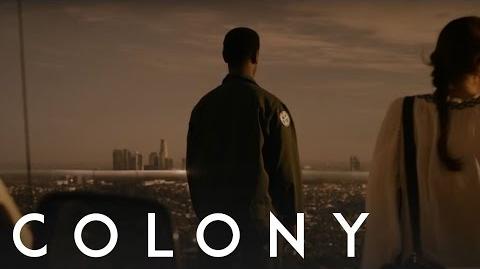 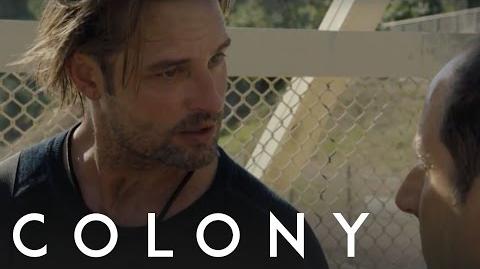 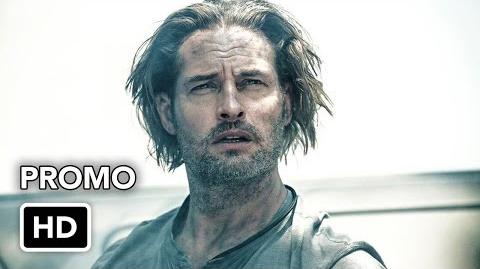 Retrieved from "https://colony.fandom.com/wiki/Broussard_(episode)?oldid=12427"
Community content is available under CC-BY-SA unless otherwise noted.