The Demis, or Los Demonios, are a group of aliens who are at war with The Hosts.[1] In the episode Disposable Heroes, they attacked two Outliers during a trial exercise. In the next episode, Bonzo, Everett Kynes sees the footage of the Demi attacking the Outliers. Later, he came to speak with a Demi whom he is holding captive. They also destroyed The Factory to prevent the Hosts from using their defense weapons.

Before the Arrival, the Demis had attacked The Hosts' homeworld and driven them from their planet, forcing the Hosts to flee to Earth, which led to the occupation of humanity's home planet. 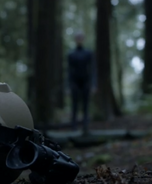 Retrieved from "https://colony.fandom.com/wiki/Demi?oldid=12307"
Community content is available under CC-BY-SA unless otherwise noted.