"Our group has a tradition, before our missions we make a toast. To liberty. "
-Maya to Bram

"Bram embarks on a risky sabotage mission with his friends; Will faces the new Resistance; Katie learns a dark truth about the bloc. "
-Official Synopsis

As Will Bowman comes under increasing pressure at work, he is disturbed by the methods of the Transitional Authority and his partner, Bob Burke. We see the operations of the new Resistance group, the Red Hand, and their guerrilla warfare tactics. Katie invites Lindsey back into her home, while also reaching out to Broussard for help. In the labor camp, Bram becomes more involved with Maya's Red Hand group; their actions have an effect the whole bloc can see

Based on the USA Network's recap, work in progress

Frankie Brun manipulates Aaron, a sick looking young man into attempting to carry a bomb inside the Green Zone. Before he starts, they drink a sake toast "to liberty." We see Aaron, looking ill and nervous, on a bus carrying a backpack. He joins a queue for a Green Zone checkpoint but becomes more and more anxious. When he tries to back out at the checkpoint, Frankie remotely detonates the explosives in his backpack, killing him, some Redhats and other people in the queue. At work, Dan Bennett's patience with Will is running out, and Will responds by saying he's been on Burke's short leash. Bennett orders them to follow up on Frankie, to whom they have connected the Green Zone bombing and the recent bomb at their headquarters.

Will Bowman and Bob Burke Edit

Burke presses Will about what he was doing the day before (when Will spent part of the day dealing with a very sick BB). Burke doesn't believe him, but doesn't have anything concrete he can use against Will. The reluctant partners visit Frankie's aunt and uncle. Will interviews them. He can tell the family is lying, but tells Burke that they don't know anything. Burke steps in and reveals he's holding the couple's grandchildren. Will and Burke argue, increasingly angry with each other, but Burke's tactics have worked, and he and Will lead a strike team into a Red Hand safe house. After a shootout where several Red Hand members and Redhats are killed, they capture Frankie and four others.

Burke lines them up for an interrogation on the lawn outside the house, executing them one by one as they refuse to answer. Will walks away, powerless and disgusted. He finds another boy inside and, as they hear Frankie call Burke an asshole outside, lets him go. Back at headquarters, Burke tortures Frankie for information until Will can't take anymore and goes in. She says she doesn’t know who runs her cell, and she's supposed to be recruiting boys. She appears to have a seizure, and Will frees her from her restraints and starts CPR. While Burke is yelling at him to stop, she is able to get to a pill she has hidden on the bottom of her foot. She takes the pill before Will can stop her and dies while he calls for a medic and comforts her. Later, Bennett reprimands Will and Burke over the botched interrogation. Burke and Will blame each other, Bennett tells them to bring him something, or they're both out.

During a photo session for a Greatest Day publicity video, Nolan Burgess tells Maddie that he's under scrutiny from the hosts because an audit has shown a sensitive data file was downloaded from his computer, the night of the dinner party. He asks who was in his office and Maddie lies, saying that she doesn't know. He tells her that it's a "significant security breach." She knows her sister, Katie, must have done it, but doesn't say anything.

Later, Maddie visits Katie to ask about the file. She admits to showing Katie the file, apparently unaware of the cameras and microphones in the house, and asks her sister if she took the file; but Katie knows - and lies, saying that she wouldn't do something like that. Maddie tells Katie that as they're under some scrutiny it would be best to work things out with Lindsey.

Knowing he can't help with the file at work, Will agrees to let Katie give the file to Broussard's team to crack. She visits a Greatest Day Church to patch things up with Lindsey, who is now calling Charlie’s behaviour "subversive". Katie is visibly shocked to see Maddie and Nolan in a promotional video for the cult. She apologises to Lindsey and invites her back, Lindsey accepts, but not graciously.

While they are having sex, Maya asks Bram to steal Snyder's access card. When the two of them leave the container they've been using for privacy, the two members of the group who've been standing watch seem to know what's been happening. Bram does what Maya asks and also tells Snyder of an escape planned for that day and Snyder promises to try to send him home. When Bram brings the keycard to Maya, she pours him a drink and they drink a toast "to liberty", as Frankie Brun did with another young man.

Broussard checks in with Hennessy, the sound guy, who gives him a NASA history lesson. He knows about the Apollo 10 mission, May 18, 1969, the fourth manned mission to the moon. The sounds recorded on that mission match the new recording Broussard has brought him. The old Apollo recording contained a countdown which got to zero on the day of The Arrival, the new recordings also have a countdown hidden inside.

Maya and The Cargo Ship Edit

Maya's team fake the escape Bram told Snyder about earlier, she and Bram take advantage of the chaos to sneak into the warehouse, where the pods are out of their crates and shrouded in red drapes.

Maya opens a pod to "make room" ignoring the unconscious young woman who flops out, choking, hacking up some sort of green goo. Bram is still trying to process what just happened when they hear a noise. Maya arms Bram with a screwdriver and tells him to deal with the threat. Bram comes face to face with Jenkins, who relishes the opportunity to punish Bram. Bram is outclassed and losing until Morales comes to his rescue and kills Jenkins with two blows to the head with a hammer. Maya doesn't return. A while later, the cargo space ship takes off and, just after it clears the camp, it starts to have trouble with damage from a small explosion spreading quickly. The ship struggles to gain height, and then the entire bloc sees it explode. Bram looks for Maya in the dormitory and Morales tells him Maya set off the bomb from inside the ship, and that there will now be consequences.

Broussard's cell cracks the file and, along with information about Bram finds projected population data in there. It shows an increasingly rapid decline of the L.A. bloc population as more and more people are sent to the factory. The projection reaches zero on the same day as the sound recording countdown that Hennessy found does. Broussard meets with Katie and tells her the news about Bram has been marked for rehabilitation and should be back inside of six months. Then Broussard asks Katie to be his partner. She wants to walk away, but he tells her about the rest of info on the file. "This isn't a colony, it's a death camp." he says.

Talking and drinking with Katie at the end the day, Will doesn't think he can keep working for the Authority. But Katie tells him about the countdown to extinction. She knows she made a promise not to get involved with the Resistance again, but with the knowledge that they're dead if she does nothing, she wants to go back and Will gives his blessing. They have to get out of the L.A. bloc as a family. She says that they have two years, three months and eleven days. 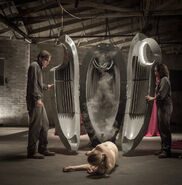 Retrieved from "https://colony.fandom.com/wiki/Free_Radicals?oldid=12438"
Community content is available under CC-BY-SA unless otherwise noted.