"Geronimo’s identity is revealed. Will begins to question his wife’s loyalties. Bram finds his way into a secret world. Snyder sees an opportunity to improve his standing."
-Official Synopsis

We see new posters being packed up, delivered to a cell and put up by young people. The Redhats chase them, when they see them, but without much luck.

At the Green Zone end of the pipe that was found in "98 Seconds", a young man goes to put some more posters into the pipe for delivery but he's disturbed and arrested by Redhats.

Will Bowman wakes up to find his wife, Katie Bowman, has been up for a while and is painting over the fire damage in the dining room. While they talk Beau arrives at their front door with coffee and news of Phyllis' death. Katie listens to the conversation from 1/2 way up the stairs.

Will & Beau go to Phyllis' house, where they meet Jennifer McMahon supervising the crime scene. McMahon is visibly upset. The bodies have been removed but there's a lot of blood evident.

In contrast to McMahon, Alan Snyder is visibly scared, rather than upset, when he arrives. He's shocked at the idea that someone in the Green Zone might have killed her or might have been involved. He backs Will, and tells him to "find Geronimo".

The young man who was arrested is 18 year-old Shawn Miller, the son of a senior Green Zone resident. Will pressures him into telling more details by threatening to have him and his family sent to The Factory.

Homeland Security, Will and Beau arrive at the Miller home, they search the house and find a door hidden behind a large framed movie poster. Behind the door is a room with printing and photography equipment, they arrest the two people there, a man and a woman in their twenties. The two claim to be Geronimo.

Abraham Bowman and Pia go on a supply run beyond The Wall. They find badly damaged, but still standing, buildings, streets full of rubble and no people. Pia shows Bram a distribution warehouse full of retail goods and food that she's been looting. Bram finds some marker pens for his sister and some coffee. Pia kisses Bram.

Snyder announces the capture of the young man and woman from the print shop and calls it an “overwhelming victory” against “the selfish forces of terror”.

Snyder in Interrogation - Snyder joins in with the interrogation of the couple and takes Will in with him. It becomes obvious that these two are not masterminds of The Resistance.

We Had a Deal - Snyder makes a deal with Ortega, he will spare his life and move him to another location if Ortega confesses at his trial.

Will Accuses Jennifer of leaking information to The Resistance, Jennifer becomes angry and tells Will of Phyllis' suspicions about Katie, after which Will talks to Lindsey at the Bowman home and to Katie at The Yonk. He doesn't get any direct information, but Katie is very ill-at-ease and the tone of his questions is quite probing, it may be that he suspects her.

Back at Homeland Security HQ, Will apologizes to Jennifer for accusing her, they have a drink together and Jennifer opens up quite a bit, telling Will about the death of her fiance just after The Arrival. She is visibly upset and Will is moved by her story.

Meanwhile, even before his trial, workers are building a scaffold to hang Louis Ortega. The trial is televised and, from what we see of it, one sided and staged. Ortega is fond guilty and sentenced to death. After the trial, Snyder double-crosses Ortega, and hangs him.

Outside the Court - Snyder Takes Will Along in his Car

Katie's Resistance Cell Gets Ready For a Major Operation 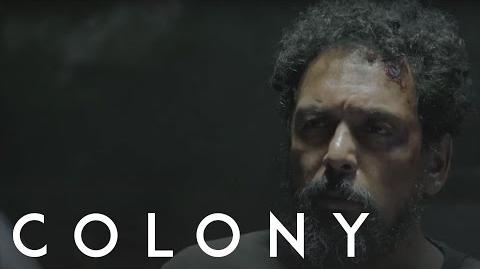 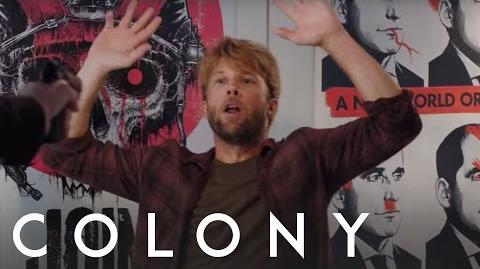 Colony 'Tracking Down Geronimo' from Episode 105 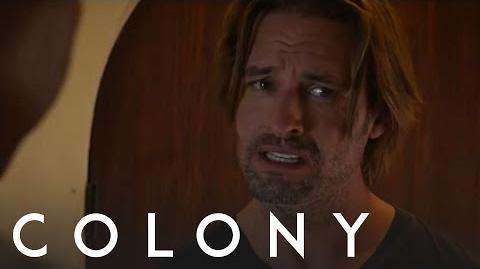 Colony 'News About Phyllis' from Episode 105 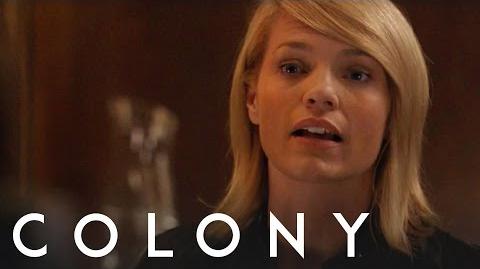 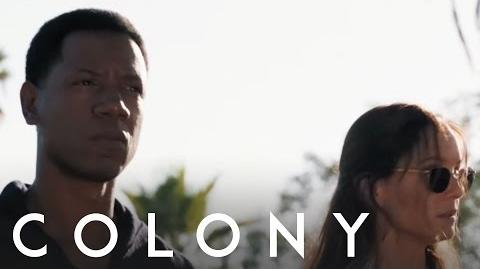 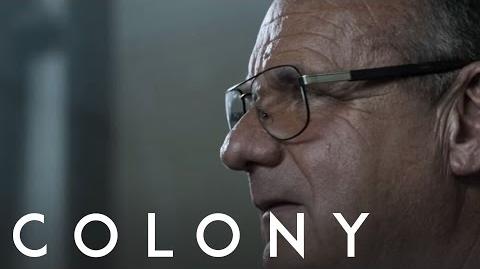 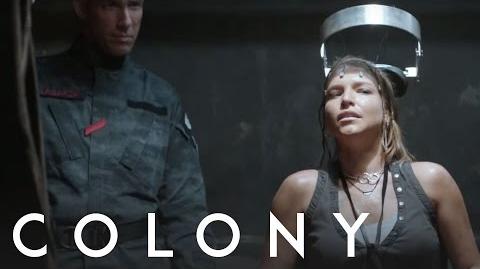 Colony Sneak Peek Episode 105
Add a photo to this gallery

Retrieved from "https://colony.fandom.com/wiki/Geronimo_(episode)?oldid=12424"
Community content is available under CC-BY-SA unless otherwise noted.