Homeland Security is a fictional organization in the TV series Colony, also known as the Redhats, the Red Berets and the Proxies. They are also sometimes called the Raps, apparently a reference to raptors (the Homeland security logo features a stylized bird of prey).

Homeland Security is an occupying military force under the control of the Transitional Authority and the Host.

The fictional organization called Homeland Security was created after the Arrival. They are an oppressive organisation and hunt down the members of the Resistance.

Will, when he was in the custody of Homeland Security after his failed attempt to find his son.

Will gets stopped by a Redhat during a vehicle check.

Homeland Security is patrolling the area. 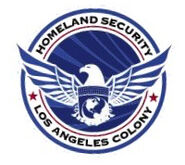 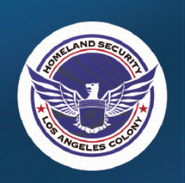 Another version of the Homeland Security logo.

Will is in the APC with the Redhats.

A Redhat in the Bowman home, when Alan Snyder cooked breakfast for the Bowmans

Soldiers hunting down the resistance.

The Redhat is calling all citizens to go back home.

Add a photo to this gallery
Retrieved from "https://colony.fandom.com/wiki/Homeland_Security?oldid=12280"
Community content is available under CC-BY-SA unless otherwise noted.