"In From The Cold"

Is this The Factory?

"A high-ranking Resistance member comes to the occupation, ready to cut a deal. Katie is given a second chance. Bram proposes a risky journey outside the colony walls."
-Official Synopsis

We get a view of a very strange looking factory, workers in yellow hooded coveralls tending to large tanks in a huge hall. As a buzzer sounds and the shifts change we see that Carlos is one or the workers going off duty. There's no chatting in either the outgoing or incoming shift.

There's also no chatting when Carlos and his colleagues sit to eat a meal. One of the men at the table has a coughing fit, coughing up blood. He's taken away by three guards in respirators and red overalls, he is still protesting that it was just something stuck in his throat and he's not ill as they drag him into the elevator. There's a sign by the elevator that reads "Gravity Normalized". None of his workmates say anything, very few even look up as he's taken away.

In Carlos' cell at lights out, Carlos is on the top bunk looking out of the window. Through the window he can see the Lunar landscape just outside and, in the black sky, the Earth. Whatever the place is that Carlos is held in, it's on the Moon.

Breakfast time at the Bowman home and Will is silent, watching Katie. Without discussing it with Katie he tells Abraham Bowman and Gracie Bowman that they know Charlie Bowman is alive. Gracie is confused, Bram is angry and storms out. Will leaves for the day after refusing to discuss him telling the children without Katie being involved in the decision. He makes a jibe about "secrets" as he leaves. Katie is furious.

Helena is waiting for Alan Snyder when he arrives for work. She tells him that a senior member of the Transitional Authority, the Chief Minister of the Pacific Coast, is visiting LA for a "performance review". Snyder smiles and Helena gloats, warning him that his methods are under review.

Rachel and her two teenage sons arrive for a meeting with Katie. Rachel's boys watch the doors while the women speak. Katie wants to leave the cell and asks for Rachel's help. Rachel agrees to speak to Quayle on Katie's behalf; she looks very worried.

At Homeland Security HQ, Beau is researching Eric Broussard and looking as if he'd rather be doing something else. Will's desk phone rings, for the first time since he took the job, and it's Quayle, telling him that his wife is the leak and wanting to meet. Will agrees and goes off to meet him without Beau.

Will recognizes Quayle as Broussard's neighbour and they talk. Quayle offers to give Broussard and the rest of his cell - except for Katie - to Homeland Security in exchange for getting out of the LA Bloc with supplies. As Quayle gets off the bus a recorded voice says that the next stop is "Hazard", which seems appropriate.

In the park, sitting by the statue, (looks to be The Lady of The Lake, by Ada Mae Sharpless) Broussard is meeting with a British sounding man we haven't seen before; he turns out to be from another cell. This other cell have come into information that a senior TA figure is visiting LA and want Broussard to run the operation to kill him. Broussard accepts an large brown envelope that contains the other cell's information and their plan.

Will gets back to the office and asks Beau if he wants to take a walk - Beau says yes and they go for an LA walk (in Will's car) to buy some hot dogs (that look just like burritos) by Echo Park Lake, the same park that Broussard's just had his meeting in. Without spelling it out, Will tells Beau that someone in his family is the leak and that he needs his help. He also tells him about Quayle coming in to make a deal, Beau doesn't need to be told that Will is worried about what and who would come to light if Quayle came in. He suggests that Broussard might take care of the matter for them, if he were tipped off.

Will goes to see Snyder, tells him about Quayle and the deal, Snyder is receptive, he likes to make deals (see Luis Ortega) and wants to meet Quayle.

Quayle meets with Broussard. Quayle needles Broussard about Katie, but Broussard still trusts her. He passes the plan to Quayle, asking for his opinion.

Will tells Katie that Quayle is betraying The Resistance, he doesn't name him. Katie takes this straight to Broussard who is very skeptical but does listen.

Bram and his teacher are trying out the new lens that Bram has supplied. On the moon they can see an obviously artificial structure. They form a plan to get a better look by using the Mt Wilson observatory equipment, which is outside of The Wall

Broussard meets again with Quayle and asks him directly if he's speaking to The Occupation. Quayle denies it, and says that the plan Broussard gave him earlier looks "solid". Broussard says that he'll start working out the details. Quayle says that he must cut off all contact with Katie, and they part. Broussard doesn't take his right hand out of his jacket pocket for the entire meeting.

Will takes Snyder to meet Quayle, at a theater. Quayle clearly knows his way around the capabilities of the Transitional Authority. Quayle says that he will set up a meeting with Broussard and some others, after which Bowman (Will) will escort him through The Wall. Snyder agrees.

The meeting is set-up to happen at a crowded market. Broussard is there, Katie is a lookout, hidden and checking the surrounding area and rooftops. Rachel is wandering through the Market, looking as if she's just browsing. Quayle is waiting by a BBQ stand, he sees Broussard and takes off his sunglasses as he walks to meet him. This is a prearranged signal and Homeland Security are alerted.

Quayle and Broussard wait for the man from the other cell but before her can get to them Katie sees Red Hats on the roof opposite. She sounds the alarm and throws firecrackers into the Marker, causing panic. Quayle is bundled away by Homeland Security. Broussard escapes, as does the man from the other cell. Rachel is killed by Lagarza. Katie sees Largaza shoot Rachel, first with his rifle and then a pistol shot to the head as she lies on the ground; then she slips away.

Will is angry, and blames Laqarza to his face.

Snyder asks questions about the failure and Will blames Lagarza again. Jennifer McMahon identifies Alexander Quayle and tells them about him. Snyder, deal forgotten, wants Quayle in Interrogation and Will goes to get him with Beau. Laqarza is suspicious of Will and exchanges a look with Jennifer as they leave.

At the safe house Beau, understanding that Will doesn't want Quayle to be interrogated, lets Will go ahead into the house on his own. Quayle is arrogant as ever and Will gets what information he can from him and then shoots both him and his Red Hat guards. Beau enters and they plan their cover story.

Their story is that Quayle and the guards were dead when they got there. Snyder doesn't believe it and is livid, says that he's losing faith in Will.

Beau and Will share a beer later, they both know that the story they've told Snyder won't last long.

Downtown somewhere, Katie and a quiet and subdued crowd look at the three dead bodies Homeland Security have strung up under a bridge. Rachel is one of them, the other two are her sons. Katie is overcome with grief at the sight of her friend's body. Broussard walks up beside her and comforts her. He says that he will have to lay low for a while but that he'll be back and will need her again. She agrees.

When Will gets home she already has a meal cooking and looks quite normal, considering her day - which she describes to Will as "fine". He says that his day was good, and tells her that "their leader and a couple of others are dead, we don't have to worry about them" now. He seems to be telling her he knows. She manages to hold it together until he leaves the kitchen. 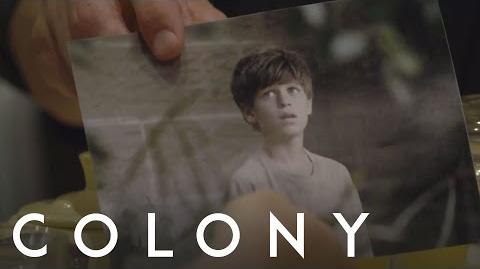 Colony 'In From The Cold’ Episode 108 Commentary 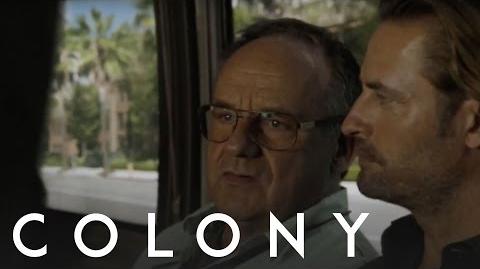 Colony 'I Run Her Cell' from Episode 108 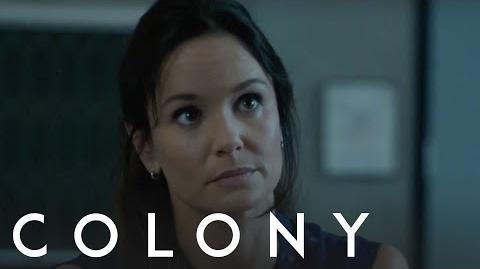 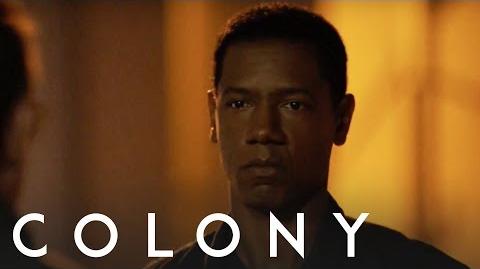 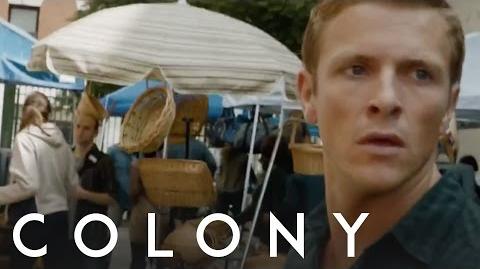 Colony 'Broussard Slips Away' from Episode 108 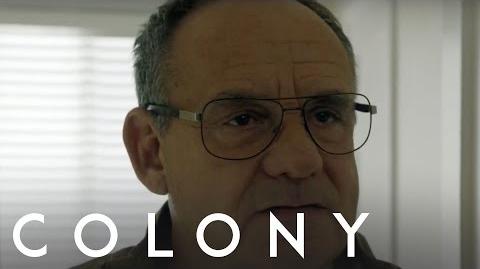 Colony 'Will Changes The Game On Quayle' from Episode 108

This just has to be The Factory

Through his cell window, Carlos can see the Earth, and knows he's on the Moon

Will decides to tell Bram and Gracie about Charlie

Will and Katie disagree

Helena visits Alan Snyder, warns him about what's coming for him

Will gets a phone call, from someone who tells him his wife is the leak

Quayle - tries to manipulate and bully Will

Quayle and Will meet

Jennifer lays it out for Snyder and Will

Katie warns Broussard that Quayle is betraying them all

Quayle and Broussard wait for Eckhart at the market

She warns Broussard and Quayle that it's an ambush

Broussard's away, warning Eckhart as he goes

and then kills her as she lies there

Lagarza doesn't take kindly to Will blaming him for Broussard's escape

Snyder is livid that Broussard has slipped away, again.

Will get's what he wants from Quayle, and then kills him

Bram and Mr Carson can actually see The Hosts' base on the Moon.
Add a photo to this gallery

Retrieved from "https://colony.fandom.com/wiki/In_From_The_Cold?oldid=12431"
Community content is available under CC-BY-SA unless otherwise noted.