"When this is over -- however it ends -- I will not be one of those mothers who has to look her children in the eye and tell them that she did nothing"
-Katie Bowman, "Brave New World"

Katie Bowman is a wife and mother looking after her family during a difficult time in occupied Los Angeles. She is much more than she initially appears to be and will go to great lengths to protect her family, and to do what she sees as her duty.

A little is known about Katie's life before The Arrival; her father was a Captain in the US Navy when she and Will married and she implies that he wasn't too happy about his daughter marrying "an enlisted army grunt"[1] (the grunt being Will). It's also known that she owns a club (The Yonk) that had to shut down because of The Arrival. Proxy Alan Snyder uses this to force the family to side with The Hosts and to collaborate, in the episode "Pilot".

Katie lost contact with her young son Charlie Bowman after The Arrival, she believes he's still alive. Katie works for the Resistance but Will, her husband who's ex-military and law enforcement, isn't aware of that, it's not clear why Katie initially kept her involvement with The Resistance from Will, especially as Broussard, her immediate contact with them, seems to know both Will and Katie. In the episode "Pilot", Katie tries to buy insulin for her nephew Hudson, when this fails she steals some from the hospital for him. When Will, her husband is captured by The Occupation while trying to find Charlie he's forced to take a job with them, hoping to use that to find his son. Katie immediately tells The Resistance about Will's job and then continues to feed them information she gets from Will about his work.

Katie holds her daughter tight, in the episode "Blind Spot" 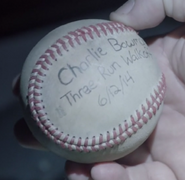 Charlie's ball, kept in Katie's box of treasures, hidden at The Yonk. Held in this picture by Will Bowman

The paperback from Katie's box of treasures, hidden at The Yonk. Held here by Will Bowman.

The photograph from Katie's box of treasures, hidden at The Yonk. Held here by Will Bowman.
Add a photo to this gallery

Retrieved from "https://colony.fandom.com/wiki/Katie_Bowman?oldid=12095"
Community content is available under CC-BY-SA unless otherwise noted.