Mr. Carson is a character in Colony, he is Abraham Bowman's teacher at High School.

Mr Carson has built a telescope and Bram offers to find a lens for it. Presumably in the abandoned area on the other side of The Wall that Bram has just visited with Pia. Bram gets a lens for Mr. Carson.

In the episode "In From The Cold" it is Mr. Carson who tells Abraham Bowman about the artificial structure he's spotted on the Moon.

In "Gateway", he and Bram are arrested by the RedHats for trespassing under the Wall.

In Season 2, in "Somewhere Out There", when he and Bram landed at a labor camp and was asked by Sgt. Jenkins what he did for a living. He answered that he was a High School Science teacher and was ordered back on the bus. That was the last we seen of him. 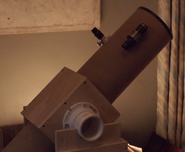 The structure Mr. Carson's spotted on the Moon.
Add a photo to this gallery

Retrieved from "https://colony.fandom.com/wiki/Mr._Carson?oldid=10833"
Community content is available under CC-BY-SA unless otherwise noted.