"Will and Katie attempt to make contact with a new arrival in the bloc; Bob has some questions for the Bowman family. "
-Official Synopsis

Bob Burke goes from soulless nuisance to outright threat as he begins to connect the Resistance dots to the Bowmans, putting their whole family in the most danger they’ve faced yet. A visitor from outside the Wall makes a dramatic entrance and may be the key to taking the fight to the Hosts –- if the L.A Resistance can find her, and if they can adapt after losing yet another member, this time to an unknown foe.

Work in progress, based on recap from USA Network

Why Would Anyone Fly Into the L.A. Bloc? Edit

Noa and her assistant are preparing a WWII era fighter plane, to fly then both into the L.A. Bloc. The theory is that the aliens can't track the technology because it's not digital, and that this will give them time to get over the Wall and bail out, leaving the plane to be destroyed by the drones when they spot it. This partially works and they do have time to bail out. Her assistant ends up dead in a tree, but she lands safely in someone's swimming pool. She disappears as fast as she can, just as the owners ask if she's OK.

Later, we see a meeting between Helena Goldwin and Proxy Alcana. Goldwin is very focused on finding the missing pilot, Alcana is relaxed, doesn't see the situation as urgent even when when Goldwin mocks what he says in front of Bennett. Goodwin has guessed exactly what is going on, but Alcana doesn't even listen. Goodwin's contempt for her new LA proxy is very obvious, but not to Alcana. Bennett keeps his mouth shut, except to say "Yes Ma'am" when she gives him an order.

Bob Burke is a dog with a Bowman[1] Edit

Will begins his day with pointed questioning from Burke about Katie and Maddie, as Burke tries to connect Katie to the file stolen from Nolan Burgess' computer. He checks the Bowman house surveillance recordings and sees Maddie confront Katie, then takes his suspicions to Dan Bennett. Bennett gives him the go-ahead to dig deeper in the hopes of using Will to catch Broussard, although he's wary of doing anything to anger Burgess. Burke also discovers that Jennifer McMahon deleted files from the Bowman surveillance. He tries showing Will's photo to Emmett, the Red Hand member who Will allowed to escape. Emmett doesn't identify Will, but he does describe the woman who tried to get him out of the safe house: Katie. Burke connects her to the mysterious woman on the subway platform who helped Broussard kill the Host.

Katie and Broussard go to meet Hennessey at the cinema which is showing The Dark Corner, a 1946 film noir starring Lucille Ball, but find his throat has been cut. They search his house and find it has been ransacked, the gauntlet is gone. Broussard turns on a short wave radio and answers a transmission from "Den Mother". When he can't supply the daily code, Den Mother ceases communication and tells everyone on the frequency to change to "signal 2".

The Net Closes Around Will Edit

After learning about the short wave radio carried by the pilot's assistant, Will goes to an electronics shop and borrows one. He broadcasts to the pilot knowing his message is not encrypted and tells her that her partner has been killed and he can help. He leaves to go meet with Katie and Broussard, but on his way he notices he's being followed. He ducks into a coffee shop across from the rendezvous point. Katie calls the coffee shop asking for "Alex Graham"[2] and talks to Will. They have just a few seconds before he sees the Redhats coming for him. He tells Katie to get the kids and hide.

Will agrees to cooperate to save his family Edit

Burke is pleased to have Will in custody and gloats that he used to be in Internal Affairs, which doesn't surprise Will. Will isn't talking until Bennett tells him they have his kids, and offers to trade them for Broussard. Will says he can't because Broussard doesn't trust him, but he says he can get the pilot. He broadcasts, using the correct equipment this time and she responds when he mentions Hennessey. She agrees to meet.

Redhats have invaded the new Bowman home and are holding the children hostage, they're waiting for Katie and using the children as leverage to make sure Will does as they want. Gracie is scared and starts crying. She tells Bram she thinks Lindsey is dead (which she is). Bram explains that Lindsey wasn’t her friend and was trying to brainwash her. As the three children are wondering what's going to happen to them, they hear gunshots outside. They look stunned rather than relieved when their mother busts through the door, expertly killing Redhats with Broussard as she goes. Katie leads her children into the sewers and the remains of the APIS Cell. Bram demands to know what's going on with his father, but she won't discuss it.

Bob Burke Makes a Mistake, and Will Sees an Opening Edit

Before Will goes to meet with the pilot in a park, he learns that shots have been fired at his apartment. With Will safely out of earshot, Bennett gets information that Katie and Broussard have taken the kids. Burke wants to abort the mission, but Bennett overrules him. Burke doesn’t listen, and walks up to Will at a soda vendor to shut things down. Will realizes circumstances have changed and that they have lost their leverage over him. He breaks open a soda bottle and stabs Burke in the stomach with the shards and runs, leaving Burke collapsed on the ground. After a chase, Will is cornered in public works tunnel by two agents and is giving up when the pilot comes to his rescue: She believes him when he says The Occupation forced him to call her, because she has just seen him stab Burke.

Governor General Helena Goldwin is coldly furious when she learns that the Bowmans have escaped and that the pilot still hasn't been found. Proxy Alcana thinks things are going well, based on the growth of the Greatest Day and the surveillance state. Goldwin isn’t impressed, saying she misplaced her faith in him and is going to make some key personnel changes. Alcala flatly rejects her changes and threatens her. Goldwin lets him go, letting him think he's won. As soon as he leaves, Goldwin places a call to Alan Snyder.

Noah from beyond the Wall Edit

Everyone is unnerved when there's a knock on the door of the Resistance's sewer hideout. It's Will. He relays a message to Broussard from the pilot that she wants to meet.

Broussard and Will venture out to meet with the pilot Noa, who says she represents a resistance group working outside the colony. To prove Broussard can trust her, she recites details of a mission he was on in 2010 that went awry. She's working with the only other person on Broussard's team at the time to have survived, she knows details that prove to Broussard she is genuine. "I'm here because the real war is about to begin, and that thing you stole is going to help us win." she says. 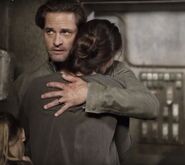 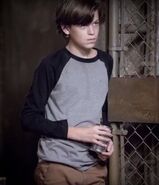 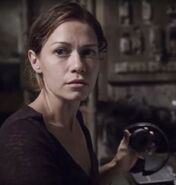 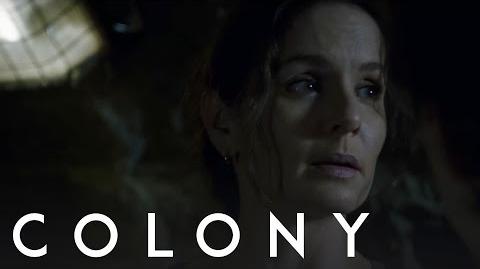 On the Next Season 2, Episode 9 Colony 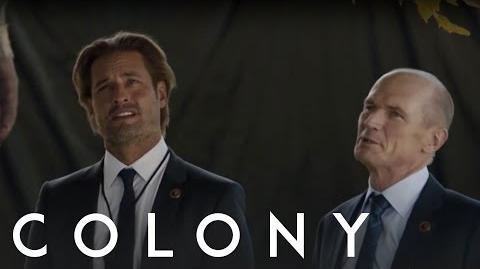 Retrieved from "https://colony.fandom.com/wiki/Tamam_Shud?oldid=12439"
Community content is available under CC-BY-SA unless otherwise noted.