"The Garden of Beasts"

"I have returned from the dead, Mr. Bennett. Do you really want to bet against me? "
-Alan Snyder, to Dan Bennett

"Will, Katie and Broussard search for a way out of the colony; Maddie gets some visitors in the Green Zone; Bram looks for closure. "
-Official Synopsis

The Bowman family is back together, living in the sewers with what's left of the APIS cell. Katie must still contend with the Resistance-related repercussions for her sister, Maddie. The sisters are both forced to make agonizing choices and take sides, while Bram struggles to get his parents to include him in the fight. The conflict gets that much harder with the arrival of the Blackjacks, Global Authority Intelligence Directorate agents.

Based on the USA Networks recap, work in progress

In the San Fernando Bloc a building is surrounded by a highly coordinated assault team of men in black leather jackets, the Blackjacks. They hone in on their target subject with precision, incapacitate him, confirm his identity, strip him down, force neon greenish liquid down his throat, and seal him in a pod. The whole thing takes a matter of minutes, and the man never gets a chance to fight back.

Katie Tries to Save Maddie Edit

Katie visits Maddie at the Greatest Day center to warn her that Homeland Security will be coming for her next. She begs Maddie to come with her, but Maddie doesn't want to be held responsible for her sister's "bad choices". Katie reminds her that Nolan turned on his own wife and shouldn't be trusted. She leaves, telling Maddie to tie a shoelace around a lamp post (a streetlight) outside the Yonk if she needs help.

Noa Brings Tales From Beyond The Wall Edit

Noa tells Broussard that life outside the bloc is chaotic and dangerous, but a group of professionals have found each other and have a secure location in the desert. They have someone who understands the alien interface, they just need a device to be able to communicate. Broussard breaks the bad news that the Redhand stole the gauntlet. He offers to help her get beyond the Wall if she will take them with her.

Alan Snyder Has "Returned From The Dead" Edit

Snyder makes the rounds at Helena Goodwin's behest, letting it be known that anyone having an issue with Proxy Alcala can come straight to him. He visits the Bowman’s old house, which is being picked apart by Blackjacks, and then Dan Bennett at Homeland Security. Snyder suggests that Bennett should want to be on the winning team. "I have returned from the dead, Mr. Bennett. Do you really want to bet against me?" Snyder says, telling Bennett to report to him from now on.

Nolan has to decide where his loyalties lie Edit

It doesn’t take long for the Blackjacks to come for Maddie. While she tries to convince them she had nothing to do with Katie’s Resistance, Nolan meets with Proxy Alcala, who knows that Goodwin is maneuvering against him and urges Nolan not to ruin what they’ve built together “for a piece of tail.” He tells Nolan to disavow Maddie. Burgess tells a Blackjack he can help make Maddie talk. He tries to assess her feelings for him, wrestling with his choice. Maddie tells Nolan that he and her son are the only good things in her life and that Katie means nothing to her now. Nolan seems to believe she means it and tells her if she wants to get out of her situation, she’ll have to follow his lead.

Broussard and Co. look for a way out Edit

Underground, Broussard (Tory Kittles), Katie, and Will (Josh Holloway) try to form a plan to leave the bloc. They visit a man named Howard Anderson at his home, scaring him enough to get him to talk about his job at the gateway. They learn that the Blackjacks' SUVs are the only vehicles that aren’t thoroughly inspected when leaving the bloc. A transponder in the car lets them through the Wall without interference. They decide to steal an SUV, but first they’ll need bait to summon the Blackjacks to them. Luckily, they’re all wanted fugitives.

Katie Counts on Maddie to Betray Her Edit

Katie, Will, and Broussard wait to see if Maddie will show up outside the Yonk. When Maddie appears, Katie has to know if her sister really needs her help. She holds out hope Maddie won’t turn on her, even as they’re counting on it. Katie calls Maddie from a pay phone. When Maddie asks for her help, Katie is ready to set up a meet. But Morgan, watching Katie’s location on surveillance, reports a black SUV racing toward Katie. Katie realises that Maddie has betrayed her. Blackjacks and Nolan were tracing her call to Maddie.

Katie runs and the Blackjacks follow. She races through an abandoned shell of a building, leading her pursuers right into Will’s gunfire. Broussard commandeers the SUV and drives around to pick up the Bowmans. On the SUV’s computer Broussard finds an open dossier on people, including Will. Katie and Will make it to the SUV, but before they get in, Will sees a Blackjack guiding something (drones) at the car with a laser designator. Will manages to yell at Broussard to get out before the SUV goes up in flames.

A scared looking Nolan tells Maddie that the operation has gone wrong, that the SUV has been ambushed and most Blackjack forces are dead. Maddies asks what it will mean for them (for Maddie and Nolan), but Nolan doesn't know.

Back in the sewers, Broussard tells them about the pod he saw in the back of the SUV and that they're looking for Will. He insist they lay low; Will isn't happy with that.

Bram wants to fight back Edit

As his parents scheme and try to find a way behind the Wall, Bram grows increasingly restless at being sidelined. With Will, Katie, and Broussard gone, Bram sneaks out. He goes to visit Maya's mother, and tells her that Maya died for what she believed in. Then he goes to see "the Cardinal", Karen Brun. Maya told him where to find her. Brun thanks him for his service in the war, and for helping to blow up the ship. When she asks about his parents, Bram says they don't know him anymore. Brun sees an opening, and tells Bram exactly what he wants to hear: that he can join her fight. 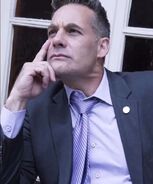 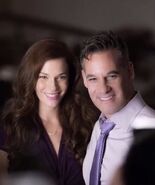 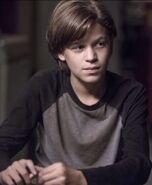 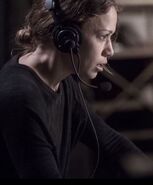 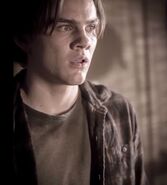 Retrieved from "https://colony.fandom.com/wiki/The_Garden_of_Beasts?oldid=12440"
Community content is available under CC-BY-SA unless otherwise noted.