Will fights back when the resistance ambushes the convoy he's travelling in with Snyder.

"A Resistance operation traps Will, Katie, and Proxy Snyder in the Yonk and tests their allegiances."
-Official Synopsis

We pick up right where Episode 105 "Geronimo" left off with Snyder getting Will to go with him in the convoy that takes him from the courthouse after the public hanging of Luis Ortega.

With the televised execution playing on the TV in the room, Helena Goldwin is doing yoga when the phone rings. It's the same model of satellite phone that Phyllis used. We only hear her side of the conversation but it's obvious that the higher-ups in the Transitional Authority have decided to leave Snyder to sink or swim and will not intervene if he gets himself into trouble.

The convoy is ambushed by The Resistance in a operation that included Eric Broussard in Homeland Security uniform and Katie Bowman timing the proceedings so that they are away before the drones can arrive. There are also about a dozen fake Red Hats.

Broussard starts everything by shooting the other Red Hats in his vehicle. This causes a crash which disables the driver of Snyder and Will's car.

The fake Red Hats obscure the windows of Snyder's car with paint, then tear off a rear passenger door.

Will and the other security man in Snyder's car surprise the fake Red Hats by firing as soon as the door goes and killing several fake Red Hats.

At one point, Broussard has a clear shot at Will, which he doesn't take. He lets Will go and kills the other security man instead.

Will reverses away at speed as Katie calls time on the operation at 90 seconds.

When the drones arrive a few seconds later the fake Red Hats have gone and Katie drives away quietly.

Will and Snyder ditch the car and cross the L.A. River using a footbridge. Snyder is terrified and is complaining and criticizing. Will tells him to shut up - Snyder does.

Will and Snyder head for The Yonk. Will bangs on the emergency exit, hoping Katie will be in early.

Katie has just returned to The Yonk, changed clothes and hidden her gun and is waiting anxiously for word over the radio that everyone is alright. She lets Will and Snyder in. She is very surprised to see Snyder. She hides the radio while Snyder panics and blusters.

Will asks if Snyder can call the drones. Snyder admits that he can't, and says that he only wants Lagarza involved in picking him up, he only trusts Lagarza now.

Katie gets Will into the office on his own on the pretext of using the landline there to call Lagarza. She challenges Will about him bringing Snyder to The Yonk. When they go back out to Snyder in the bar, they tell him the landline is dead. While they're talking Katie sees that Will is injured. Will goes to find a payphone.

At the Resistance Cell, Rachel is bandaging a man's arm when Broussard arrives. He asks about Alan, and Rachel indicates the body of a man lying on a table. Rachel asks if he's OK and Broussard says that he "got through clean". Rachel looks at him and raises an eyebrow. Quayle arrives and Broussard gives him a report, they're interrupted by a young man who tells Broussard that there's a call from Katie. Katie gets him to repeat that Will is "off limits" and she tells him Snyder is at The Yonk

Snyder and Katie talk in the office. Katie is reluctant but does make conversation with him. she asks and he tells her that he was the Provost at Stanford University at the time of The Arrival (a real job, link here) and he was approached to run L.A. Katie asks if he was approached before "The Arrival" and he hesitates before answering "after". She also asks about other colonies and he tells her that the Pacific Coast region, Oregon and Washington contain 7 colonies, but that that's all he knows. He also says that the land between the colonies is somewhere you don't want to be.

Will arrives back; he's called Lagarza and he's on his way - 21 minutes out. Snyder complains at the delay. Katie looks after Will's arm. She tries to persuade Will to give Snyder to the Resistance but he's not persuaded. When they go back out of the bathroom Snyder tells them that he has confirmation that their son Charlie is alive and that he's working to get him back.

While they're talking, Broussard bangs on the door, on his own in his Red Hat uniform. Katie lets him in and he searches the building. He looks into the bathroom where Snyder is hiding but does not check the stall. He gets Katie to escort him down into the cellar so that they can talk without being overheard. In the cellar Broussard admits that he knows where Snyder is and tells her to get him out of the back door. He leaves from he front door. Katie points out that the Red Hat was on his own - something Red Hats never do, and Will points out to Snyder that he'd left his jacket in plain sight.

Will and Katie barricade the bar as well as they can against the fake Red Hats they know are coming. Snyder is increasingly panicky. 7 minutes until Lagarza will be with them.

Snyder openly uses Charlie as a bargaining chip and Katie attacks him, very nearly forcing him out of the door into Broussard's hands. She sees the fake Red Hats out there through the partially opened door before Will gets it closed, saving Snyder again. Will stands between Katie and the Proxy Governor. Snyder almost pleads with them, saying that those who are plotting to take his seat would be far worse. He seems to really believe that he's the best option for L.A.

Quayle, meanwhile, loses patience and tells Broussard to get Snyder and to break their agreement with Katie if need be.

Snyder reveals that the Rolodex was used by the Hosts, and that they had all that information with them "when they arrived" and that it was a "humbling moment" when he met them.

Will hears them starting to come in and orders Snyder into the office and Katie into the cellar, she argues but finally agrees.

The fake Red Hats break in. Will kills most of them but is pinned down by the last of them behind the bar. Katie shoots the last one as he's about to shoot Will.

Broussard enters - orders Katie to drop the gun. Will diverts him to the office and the open emergency exit and Broussard chases out that door, Will follows and Lagarza arrives.

Snyder turns out to have been hiding in a cupboard under the bar. He orders Will to find Broussard and leaves.

Getting ready for bed that night, Will reassures Katie about the man she killed at The Yonk and tells her what he's discovered about Geronimo.

Quayle and Broussard are seen talking outside, Quayle has decided that Katie is a double agent. The curfew siren sounds and they part without speaking. 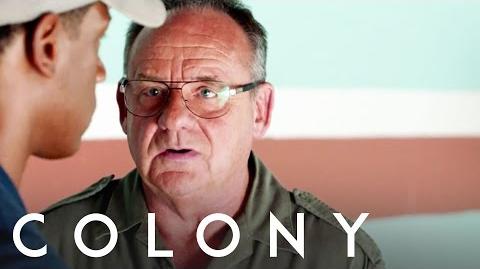 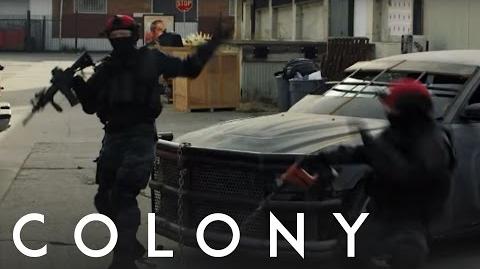 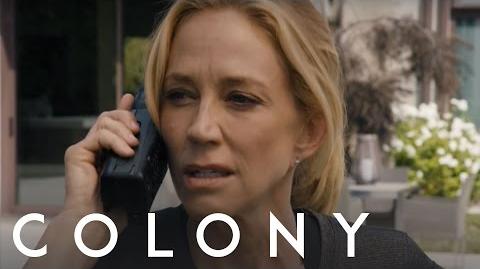 Colony 'Phone Rings' from Episode 106
Helena gets a phone call 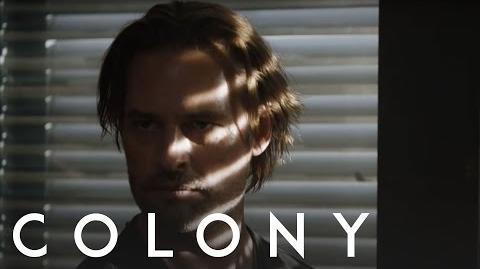 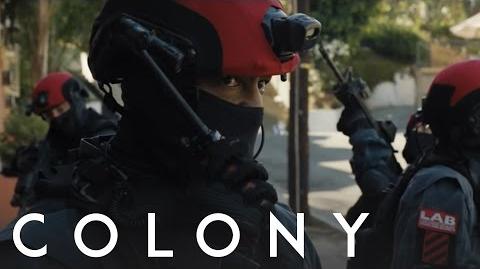 Colony 'Bring Snyder Out' from Episode 106 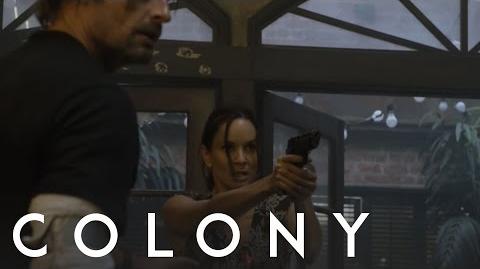 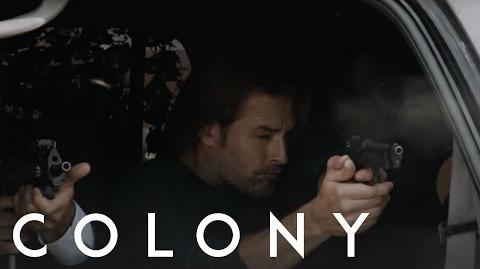 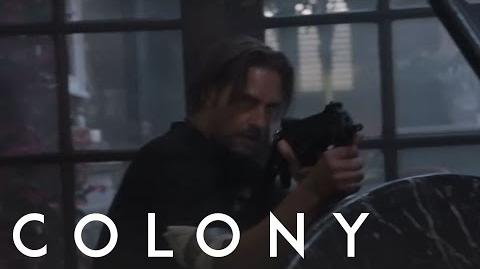 Colony Sneak Peek - Episode 106
Add a photo to this gallery

Retrieved from "https://colony.fandom.com/wiki/Yoknapatawpha_(episode)?oldid=12425"
Community content is available under CC-BY-SA unless otherwise noted.