Katie and Broussard prepare for a high-stakes operation.

"Will plans to get his family out from under the occupation. Katie and Broussard prepare for a high-stakes operation. Snyder fights to protect his office. Maddie makes a bold political move."
-Official Synopsis

It's the evening of Day 366 and people in the LA Colony are remembering those who were lost during The Arrival. We see a quiet suburb with people launching paper hot air balloons, each with someone's name and picture. One little boy, watched by his dad, carefully lets the fragile balloon with his mother's picture on it go. All around him, other people are setting loose their balloons and watching, hundreds of them floating away in the clear night sky.

Homeland Security arrive in force and tell the peaceful crowd to disperse. One or two take offense at the Redhat's attitude and it quickly turns violent.

An aerial shot shows us that all over the city there must be similar groups because the sky over the city is full of paper balloons held aloft with their small flames. The Hosts' Drones dodge around the balloons as they fly to investigate several large fires that have taken hold.

The morning of Day 367, and Will and Beau, as part of Homeland Security investigate some of the Redhat deaths of the night before. They remember The Arrival themselves and Will talks about how he had to fight his way across the city to get to Katie, about hearing of his colleagues being killed and not being able to go home. They have obviously been planning and waiting for an opportunity. They decide that these disturbances will persuade Snyder to do whatever they ask him to.

Alan Snyder, at Homeland Security HQ and trailed by Lagarza and his entourage, is sounding panicky as he complains to Jennifer that the extra resources he'd deployed had done no good at all. Jennifer is taking him through the events of the evening before in more detail when Will and Beau are waiting for him and ask to speak to Snyder in private. They say they have information that operations are being directed and carried out from outside the colony, from the Downtown area which is the other side of The Wall, and abandoned. Snyder is sceptical but agrees to them investigating; he also has Lagarza go with them.

Katie meets with Eric Broussard in a ration station that's been damaged by the riots and abandoned for the moment by the Transitional Authority. Katie has been worried about not being able to get in contact with Broussard, he tells her that he was giving her some time after the deaths of Rachel and her sons.

In the Green Zone, Maddie has a bonding moment with Nolan Burgess until she's given kitchen duties by Charlotte Burgess to put her in her place.

When Will and Beau go outside the colony it's in a small convoy, sirens and blue lights st speed in the deserted downtown area.

Alan Snyder gets a visit from Nolan, he presses Nolan to give him details of a plan to replace him as Proxy Governor that's been commissioned by Helena Goldwin's office. Nolan squirms on the hook a little but agrees to do it.

Katie and Broussard visit Eckhart's cell to discuss the operation they need help with. They meet with Eckhart, Morgan and Beebee. They turn out to have been business partners prior to The Arrival and their company (APIS) was designing an insect-like drone. They've been using one of the prototypes of these drones to gather information from Homeland Security and have found out that a senior member of the Transitional Authority is visiting, they have details and want to disrupt the visit. They know that the VIP is using a particular Metro line, but not which station. They agree that Eckhart, Morgan and "B B" will check out Wilshire/Vermont station while Broussard and Katie look at MacArthur Park station.

Charlotte tells Maddie "good job" for cleaning the kitchen. Maddie gives her details of a major art collection, belonging to "the Mandels", that Charlotte's not aware of.

Downtown, the Homeland security team are searching a tall building. Will and Beau separate themselves from Lagarza and get to the top floor. The room there's still laid out for a wedding reception from a year ago. They have a good view of the city; there's a lot of damage, and many thousands of cars stacked up, they also see that the route to Big Bear, where Beau has property, is very damaged and not usable by vehicles. Will plants a map for Lagarza and his men to find and then the two men stage a firefight, by firing around the room and radioing Lagarza for backup.

Lagaza and his team arrive and Will and Beau pretend they just missed someone escaping. Lagarza finds Will’s "hidden" map, which they take back to Snyder. The map shows that the attacks are coordinated, and this corroborates the story that they’ve been trying to sell. Snyder tells them that Homeland Security have found a tunnel underneath the wall, which sounds like the tunnel Bram and his girlfriend Pia use, and they are going to shut it down. Will wants to use this tunnel to escape and persuades Snyder that they can set a trap instead. He doesn't know that the tunnel is used by Bram and Pia.

That evening, at The Yonk, Katie is practicing her shooting skills in the basement with Broussard. Their operation will involve killing numerous Red Hats; Broussard tries to get Katie to realize what she’s committing to - telling her “there’s no coming back from this,”. She comes back to work and Will is there. He asks if she remembers when they first got married and talked about living up in the mountains, away from everything. He asks if she would still do it if that meant they could be together again, with all of their kids. She says yes, but it's not clear if she realises she's being sounded out about Will's actual plans.

Nolan comes to meet Snyder, who asks if he knew about the Chief Minister’s visit that’s taking place. Nolan insists he has no idea about any plan to replace Snyder, Snyder doesn’t believe . Later he's with the Redhats who raid his house; he finds the new portrait Maddie’s gotten them. “This is the sort of thing that should be up with our hosts.” Nolan claims no knowledge of it and, for once, he seems to be telling the truth. HIs wife Charlotte tries to blame Maddie, but Maddie says she’s “just an assistant.” and Charlotte is taken away. Nolan brings Snyder the proposal later, Snyder says there’s going to be a fight if they’re going to keep their jobs. Nolan seems to have chosen sides, Maddie and Snyders sides.

At home, Katie is getting her gear ready for her mission while Bram is also getting ready to go out, with what look like tools suitable for a trip through the tunnel. He has to stay at home to care for Gracie. Katie gives him a card that has a number he can call if there’s an emergency. Gracie’s picked up on the argument, however, and asks if Katie is mad about Charlie. She assures her mother that Charlie is going to be okay — all the kids are — and Katie finally picks up on what she’s reading, though Gracie tries to keep her book hidden. An enraged Katie realizes Lindsey’s been indoctrinating her. Later, she shows Will who stuns her by telling her that the plan is to leave that night. He confronts her with his knowledge of her involvement with the resistance and, especially with Broussard and they argue bitterly.

Will leaves to meet Beau, he tells him to go without them and Beau agrees.

Katie goes on the resistance operation with Broussard and Eckhart's cell. They successfully get inside the metro station and BB's bomb destroys the VIP's train as it arrives. They search the train and don't just find bodies. They also find something that could be a humanoid android or a Host in a protective suit. 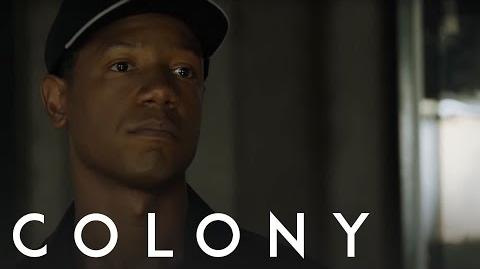 Colony 'Cells Size Each Other Up' from Episode 109 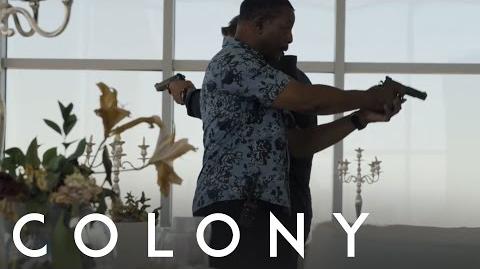 Colony 'Frame Up' from Episode 109 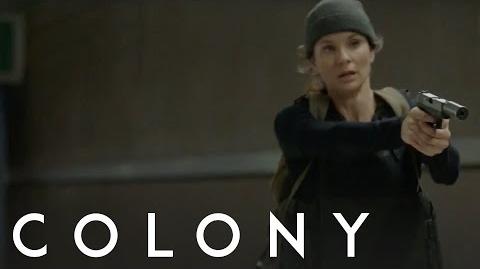 Colony 'Katie the Commando' from Episode 109 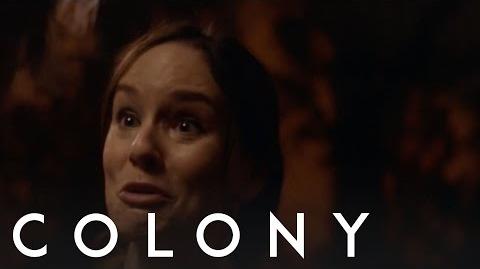 Colony 'How Long You Been Spying On Me?' from Episode 109 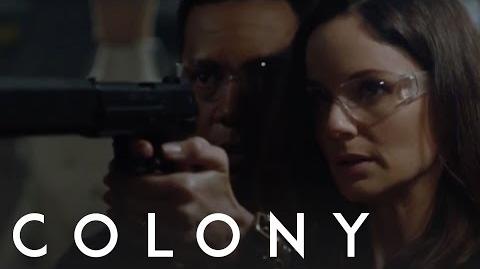 Seen on the bombed train
Add a photo to this gallery

Retrieved from "https://colony.fandom.com/wiki/Zero_Day?oldid=12434"
Community content is available under CC-BY-SA unless otherwise noted.